Once upon a time you could watch television or go to the cinema. If you loved a film, chances are you would never see it again, unless it ended up on television. If you missed an episode of your favourite serial, that was it, gone for ever. The advent of video machines changed everything; you could go to Blockbusters and rent a video of your favourite film to watch at home. If you were going out or did shift work you could record your favourite programme and come home to find you had pressed the wrong channel…

Since then viewing has become far more complicated and gone are the days when everyone watched the Sunday night drama and talked about it on Monday. Catch up, iplayer, fire sticks, boxes of all sorts, Netflix, cables and satellites; gigantic screen televisions down to watching programmes on your phone; take your pick. But a good film, comedy or television drama still stands out.

I love a good comedy. We don’t have Netflix, but we know someone who does and the fact that they moved thousands of miles away doesn’t seem to have stopped us using it. So we have been catching up with ‘The Letdown’, the hilarious and realistic Australian portrayal of parenthood. If you have ever had a baby or there are new babies in the family you will recognise the scenarios. Gone are the days of sitting bored and lonely in the dark watches of the night, feeding a baby who is very cuddly, but not intellectually stimulating. Modern breastfeeding mothers are on their smart phones exchanging sympathy with sleepless mums all over the world and probably looking up the latest advice on the many Facebook support groups. The downside is that new parents are under pressure more than ever to do the right thing, whatever that is. If you get the chance, join Audrey as she meets other mothers and thinks they are all doing it better than her…

We have finally caught up with Three Billboards Outside Ebbing Missouri. After seeing it reviewed on one of our favourite film programmes, knowing it was co-financed by Film4Productions, I was confident it was my sort of film, even though I don’t like films with lots of swearing and violence. The next day, talking about cinema with a friend, I mentioned there was a film coming out that Cyberspouse and I both wanted to see, though by then I had forgotten what it was called and what it was about.

It completely lived up to our expectations. Dark indeed, with violence and swearing, but the humour was brilliant, the story poignant. To carry off a film like this you need the best actors. My only pre conceived idea was that Francis McDormand would be good, but Woody Harleson and Sam Rockwell were also brilliant. 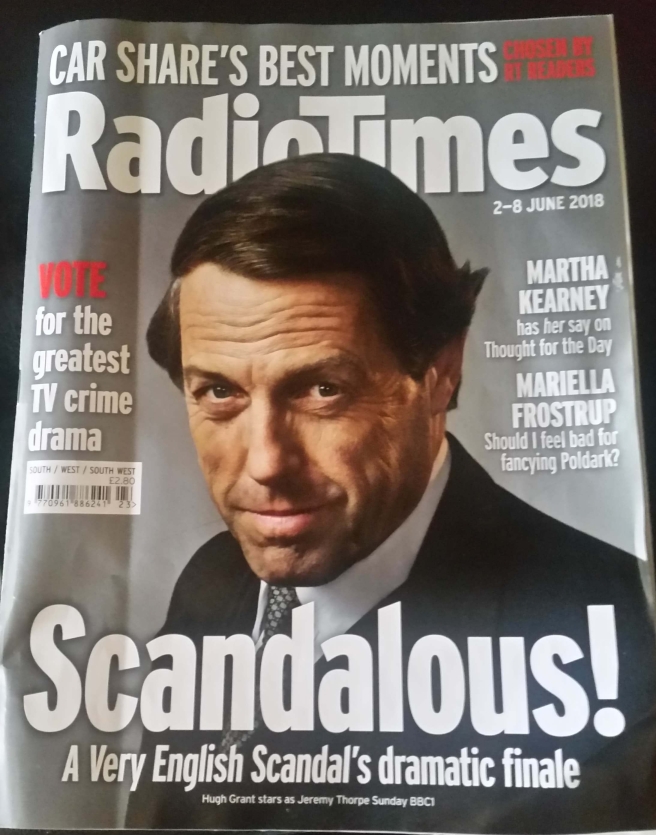 A Very English Scandal on BBC television was three episodes of perfect Sunday evening drama. Russell T Davies’ production was blackly comic (are you sensing a theme here of my taste in viewing? ) and has had viewers agog.  Political scandals are not new, but the 1979 trial of Jeremy Thorpe, the leader of the Liberal Party and Member of Parliament for North Devon, revealed years of cover ups, lying and a farcical attempted murder that you couldn’t make up. It was also a story, familiar now, of a man in power abusing the trust of the most vulnerable. Even today, politicians who are gay often don’t ‘come out’ till their mother has died, or to avoid upsetting their family’s religious sensibilities. Before 1967 all sexual activity between men was illegal throughout the United Kingdom with heavy criminal penalties and was a sure way to destroy one’s career. Thorpe’s sexual encounters with other men and his affair with Norman Scott had to be kept secret, even if it meant killing the young man. Perhaps the public were most upset that the Great Dane was killed by mistake, Norman was only spared because the gun jammed.

The most scandalous thing about the trial was the judge’s totally biased summing up for which he was later lampooned by comedian Peter Cook. All those accused of conspiracy to murder were found Not Guilty.

This delicious three part drama, with its dark humour, worked because of the excellent acting in every part, it was Hugh Grant’s best ever role and Ben Wishaw is always brilliant in every character he takes on. We watched in real time and the icing on the cake was the showing straight afterwards of a 1979 Panorama documentary, intended to be shown after Jeremy Thorpe was found guilty. It had never been shown before. And there was more drama to follow. Tom Mangold who made the documentary, was walking his dog in the park and met a man who claimed to have also been hired to kill Norman Scott, but didn’t go through with it. Andrew Newton, the man accused of the attempted killing was claimed by police to be dead, but is now claimed to be very much alive, living under another name. Gwent Police have reopened their enquiry into the scandal. Sunday night news showed a plainclothes officer knocking at a front door; of course no one was in, another amusing post script.

The printing press was invented nearly 600 years ago, Gutenberg credited with the birth of mass communication; but of course the written word goes back much further. Has the invention of the E-book been as important as the invention of the printing press? Not in terms of mass communication; radio, television and the internet surely qualify for that.

Have Kindle books revolutionised our reading habits? Real paper books have survived radio, television and the cinema so are unlikely to suffer a demise. But e-Books have brought new delights; reading in bed in the dark still gives me a wicked thrill when I recall my childhood self trying to read with a torch under the covers without being caught. Packing one slim item for holiday reading, or on the commuter train with nobody knowing which book you are reading… But people still love the feel and colour of real books and I never dare take my precious Kindle on the bus or to the beach hut, paperbacks still have their use.

But for the Indie writer Amazon Kindle provided a tempting doorway into self publishing with a worldwide audience, not necessarily translating into world record sales, but with the opportunity for your aunty on the other side of the world to download your wonderful novel onto her Kindle in seconds.

Self publishing is not new; famous writers in history have published their own novels or pamphlets of poetry. In the modern world unknown writers must first find an agent, who in turn must find a publisher who in turn may let months slip by and still reject the precious manuscript. No wonder lots of writers have turned to what used to be called vanity publishing. They have the advantage of real books to show friends and take to local bookshops for signing events. They may be very successful or could end up with boxes of books in the garage.

Print on Demand is another development which is an attractive proposition. When I first started reading writing magazines one editorial suggested we would soon be wandering into bookstores with a memory stick and downloading our novel, returning later in the day to collect a printed book. That hasn’t happened, but recently Kindle Direct Publishing announced that authors could now create paperbacks as well as e-Books for free. Of course the publishing costs come out of the book sales, but at Chez Gogerty Publishing House it seemed an opportunity too good to miss, as I was just editing a collection of short stories, Tides and Times. Even if we only produced one real book to give my 91 year old mother it was worth a try.

Cyberspouse is always willing to face a technical challenge if it involves no financial outlay. After several attempts at downloading his own  cover design, the book was accepted, then we had to wait for it to go ‘live’, then we ordered one copy…

We were not disappointed, it looked and felt good, we ordered five more. One of the reasons why Amazon is so successful, why we can’t help using them for everything under the sun, is that they always deliver in all senses of the word; they tell you it’s on it’s way, they tell you when it will arrive.

After four years of extolling the virtues of Kindle books to my writers’ group, mostly to no avail, the five copies were snapped up. So now to finish writing my next book with renewed vigour and to turn my back catalogue into paperbacks.

How does all this work? Obviously by magic. In a mountain cave somewhere are lots of little Amazon Elves beavering away at a printing press. I just hope there is not an international scandal involving zero hours contracts and mistreatment of Elves, so that we are all expected to boycott Amazon and sign petitions on Facebook…