Why would you paint a hotel battleship grey, inside and out; isn’t the idea to attract guests and customers not make them feel as if they are in prison? Perhaps the owners of The Swan, Alton, Hampshire got a job lot of grey paint.

Our two nights away in Hampshire started off in sunshine. Part of the plan ( the main part ) was to use up our tickets for Jane Austen’s house, the tickets lasted a year and we had only a few days left. If you ever buy tickets for any place and are delighted you have a whole year to revisit, it is guaranteed you will never return; even if you live in the same country, even if you have not been kidnapped for a year or overcome with disasters, you will not return. As the sunshine disappeared and the day became overcast and grey Cyberspouse asked if I had remembered the tickets. I hadn’t. Never mind, we would buy new tickets and make a contribution to a national and literary treasure.

By the time we reached Alton the sky was heavy and grey and matched the hotel, this was our first view from the car park. Inside, all the decor was shades of grey, brightened only by a gloomy tartan carpet and pictures and lights. However, the staff were friendly and cheerful.

Our room had a little sitting room with a small television screen and a tiny bedroom with a large TV screen. We were just in time to watch the Oxford Cambridge boat race, but the big screen would not work, lucky we had two TVs. This little sitting room could have been cosy, less like a prison cell,  in another colour scheme with better views,

On the way out to explore we reported the broken television. When we returned they were just about to fix it; the second chap seemed to know what he was doing and after ripping it off the wall and repeated trips back and forth it was fixed.

When we went down for dinner the TV fixer showed us to our table. In fact he was on duty the whole time we were there, at the desk and everywhere and checked us out when we left.

Breakfast was okay, with orders freshly cooked, but an uninspiring breakfast bar with flasks for tea and coffee. On the second morning I asked if I could have a tea pot and that is what I got, no cup, no milk no extra hot water, back to the breakfast bar for that.

..First mentioned in a rental document in 1499, the Swan hotel is an iconic building, set in the old market town of Alton. A tavern and hostelry, it was listed in 1674 as having 18 chambers, a parlour, kitchen, brewhouse, malthouse, old kitchen, and wine and beer cellars. It was further developed in 1777 to become the coaching inn you see today. The Swan would have been well known to famous local residents; author Jane Austen and naturalist Gilbert White.

Yes we did get to Chawton to visit Jane again and now we have a year’s tickets for her cottage and The Big House. The weather remained unremittingly grey for our stay, but we enjoyed our visit which you can read about next week. In the meantime here are some mellow and misty pictures of Chawton at my website.

What is the worst colour hotel you have been to? We once stayed at an Edinburgh hotel which was literally all tartan, we were definitely plaid out by the end of our visit. Candy pink would be too sickly, what colour would you paint a hotel?

After finally finding and checking into Primrose House we were offered birthday cake. Then came that B&B tradition of the first night; setting out for an evening walk and finding somewhere to have dinner. We took the coastal route round the harbour, looking for the Tate Gallery first to see how far it was and check opening times. St. Ives was buzzing, it was half term Saturday and everyone was off to parties or heading for dinner. In the dark we took a circuitous route round the narrow roads and when we found the gallery there was no information board outside. After finding some places full we settled on a fish restaurant hiding above a fish and chip shop, it was pleasant but pretentious. What I had was basically a piece of plaice on top of some mashed potato. When we got back to our B&B the chocolate birthday cake was still out on the table, so we took another piece up to our room. We looked up opening times for the Tate on the internet, closed on Monday, so tomorrow it must be. We wouldn’t have to move the car yet.

On Sunday the sun was out and the beach and harbour made a good walk after our cooked breakfast. The low tide harbour looked like a beach and the people walking on it seemed in no hurry to leave as the tide came in and fishermen clambered into their boats ready to sail off. 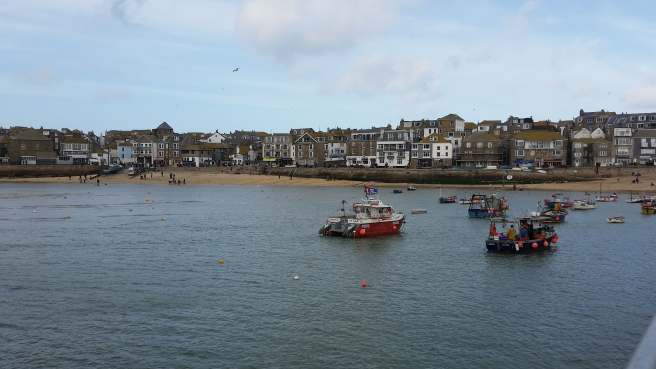 We have been to St. Ives several times and I am always amazed at the bright turquoise of the sea. From inside the Tate Gallery you can see the beach framed like a picture. The building is bright and white inside and out, airy and pleasant and of course there is a cafe and shop. You can have a look round the gallery here.

Our evening meal we had already booked at a hotel back near our B&B, a Sunday roast. If we had just stuck with the main course we would have thought it a good meal. Having wondered if we could manage a pudding, would it be greedy etc. we needn’t have worried. Cyberspouse’s jam rolly-polly was merely a thin slice of Swiss roll with a jug of custard, while my lemon tart a thin sliver of pastry with a smear of lemon curd. 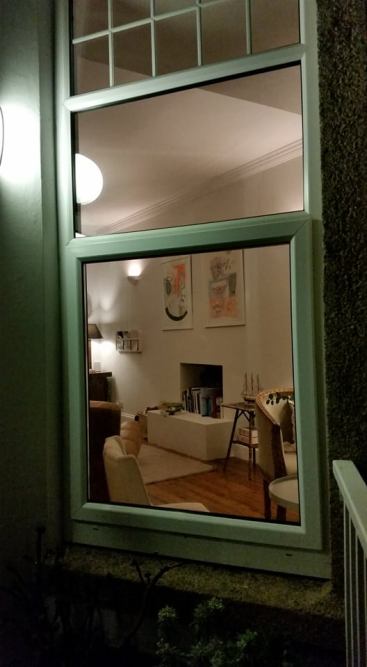 Monday was the day of the Tin Coast. Cyberspouse wanted to show me mines visited when he and his friends went on their photography trip. We would have to drive the car back up that narrow steep road. Our host assured us one hardly ever met anyone coming down, but if we did the protocol was those going up had to back down. We were nearly at the top, the main road in sight, when another car started coming down. I closed my eyes – I wasn’t driving . An expert bit of manoeuvring and we were squeezed onto the driveway of  someone’s house.

The Levant mine was still closed for the winter, but apparently has a restored working beam engine and the mine itself went deep under the sea. The rugged scenery alone is worth the visit. Then we drove a little further on to Botallack, even more rugged and I realised the perilous path trodden to get to the good spot Cyberspouse wanted for his tripod. As I don’t like heights I went no further and could hardly bear to look. I have since discovered, when we saw our friends, that his wife also refused to cross nature’s bridge of terror when he took her. 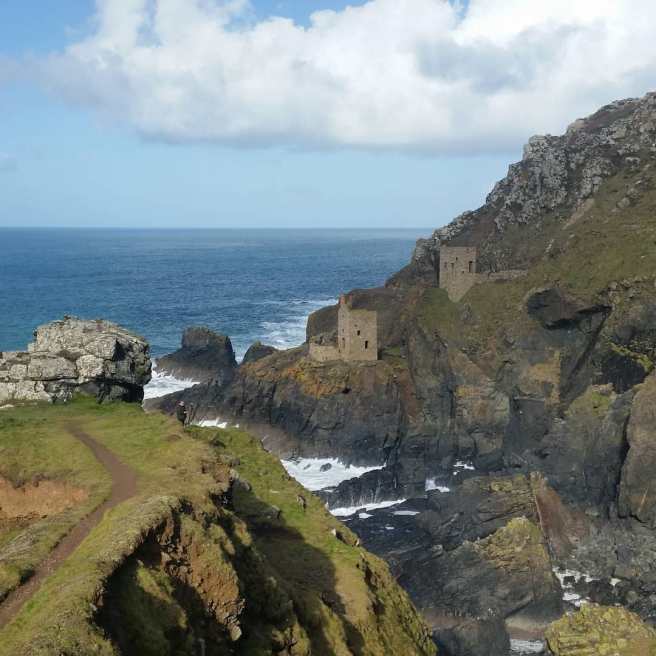 Cape Cornwall was different again with rolling grass that made you feel like running down, even rolling down the grass like children do. Perhaps if adults acted with the carefree abandon of children and dogs it would be good for their mental health. We wondered who the monument on top of the headland was dedicated to.  The answer was baked beans. Or rather Heinz, Guardians of the Countryside, had purchase the land for the nation in 1987 to mark their centenary year and presented it the National Trust. By now I was ready for a nice cup of coffee, sitting at the bench in the sun outside the little cafe at the end of the toilet block. But when we got back down it turned out they were only getting it ready for the weekend. So it was off to St. Just for a traditional Cornish pastie. 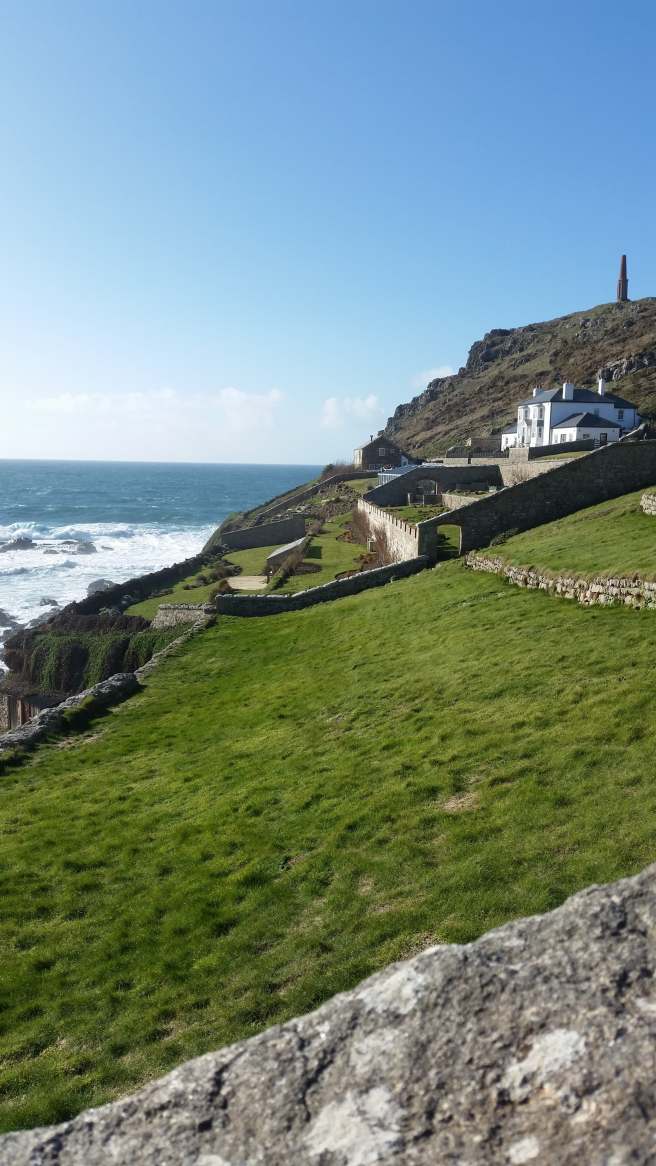 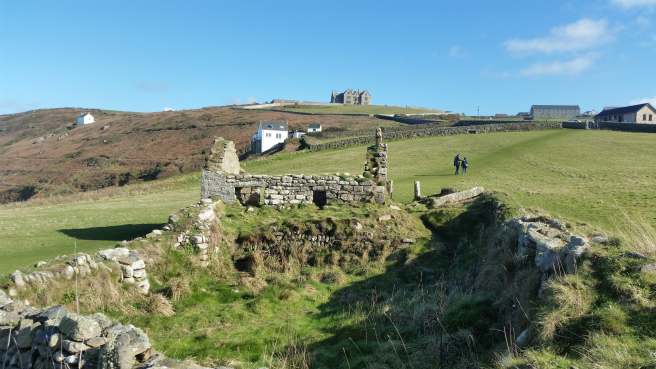 You can see more pictures of our trip at my website.

February may not be thought of as a holiday month in England, except for going abroad for sunshine, but there is plenty to do on a long winter weekend. We headed west through three counties and thick fog to reach Saint Ives on the north coast of Cornwall, nearly at the most westerly tip of England. A three night stay gave us two days of fine weather to enjoy photo opportunities, a blogworthy bed and breakfast establishment and too much inspiration for just one blog.

Cornwall has its own language, flag and nationalist movement. In the past it must have been very remote from the rest of England and in 2014 Cornish people were granted minority status under the European Framework Convention for the Protection of National Minorities. But if you are in a holiday town you are more likely to be continually bumping into Londoners and others seeking the good life. Perhaps the locals are busy going out in their fishing boats rather than sampling fish restaurants.

Incomers are not new, Saint Ives famously has attracted artists since the nineteenth century with the quality of light and beautiful blue seas. Now the town is also well known for its Tate Gallery, squashed between housing association flats on the promenade. Inside, the light and airy building comes into its own, with a beautifully framed view of the beach, which my photograph doesn’t do justice to!

The town has layer upon layer of higgledy piggledy old buildings and narrow lanes clinging to its steep hills; a tourists’ delight. When we see modern tiny houses being built we think them ridiculous, but minute old dwellings most of us find irresistibly cute. Wandering around the maze of lanes we saw  a door only two foot wide at the top of steep steps and one building where a few steps took you below ground to two tiny front doors crammed at right angles; they were holiday lets.

Out on the moors there is plenty of space; the attractions for visitors include the old mine workings and the rocky coast where unbelievably blue seas with snow white surf pound black rocks. Fans of the Poldark books and television series will be familiar with the Cornish scenery and it is as fantastic as it looks on television. Winston Graham the author was not a local by birth, but did live in Cornwall for thirty five years from the age of seventeen. 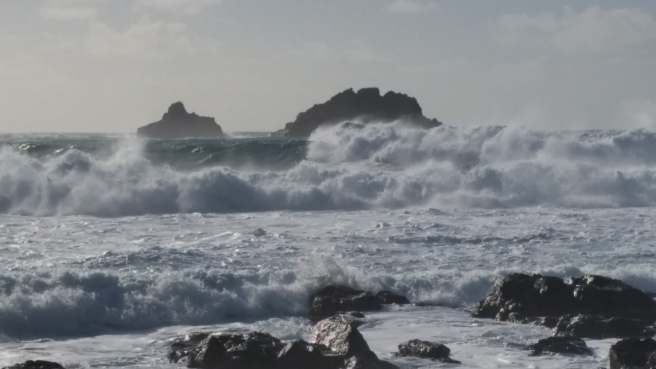