Do you like those music quizzes on the radio where you have to listen to the opening or closing notes of a pop song or piece of music and see how quickly you can guess what it is? If you listened to an opening chord strummed on guitar for less than three seconds and not a single note more, would you guess the song? For many of us A Hard Day’s Night by the Beatles is instantly recognisable, probably bringing memories of the cinema where you saw the film of the same name. Paul McCartney famously never learned to read or write music, instinctively using chords, complex harmonies and change of key without ever learning the mathematical theory of music. Songs have always passed down through the generations without needing to be written down and we all learn to talk before we write. Perhaps McCartney feared the magic would be broken if he tried to learn music properly. Straight to fame without the years of study at music school, the only downside apparently being that he needs help to write his orchestral pieces.

In the days before recorded music, Bach’s astonishing output would have been lost forever if he had turned up every Sunday morning at Thomaskirche in Leipzig, expecting the Thomanerchor to perform his new cantatas off by heart, because he couldn’t write them down. 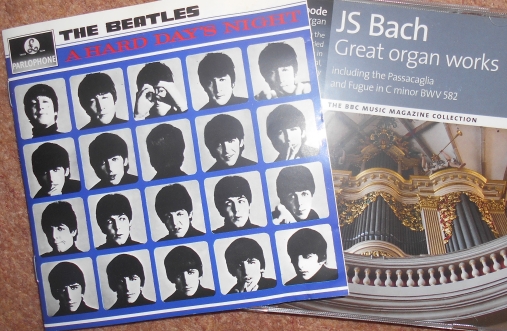 For most of us, our attempts at learning an instrument bring our first contact with musical notation. I still feel aggrieved that I always ended up with the triangle and not the drums on the rare occasions when we had ‘the instruments’ out in junior school. But another opportunity presented itself when I was seven or eight. I waited till bedtime to ask my parents if we could get the violin out of the loft as I had to take it to school the next day. We had been told in class that if anyone had a violin they could have violin lessons, this was the first my parents knew about it. How I even knew that Dad had an old violin he had bought for half a crown in his youth remains a mystery, he had never shown us, let alone played it. But the instrument was duly produced and at school the violin tutor took it away and exchanged it for a quarter size. Maybe Dad’s original instrument was a Stradivarius and she made a fortune, we will never know.

Violin lessons took place in the same room as school medicals, the headmaster’s office up a narrow staircase in the old Victorian building, in winter an ancient bar gas fire was lit. I memorised the four strings GDAE, put rosin on my bow, learned the treble cleff  and did give one public performance; in our garage in the back garden. Mum’s friend round the corner had six children and we put on a variety concert when aunties and uncles were visiting. I played a solo, Three Blind Mice. The audience had paid sixpence each for the excruciating experience. That was the height of my career as a violinist.

Like the rest of my family I later attempted to learn various instruments, with little success. The guitar can sound impressive merely by learning a few chords, or that’s what I hoped, but I had the wrong hands, fingers not long enough. At college I was in a recorder consort, playing descant while the more proficient played alto, tenor and base. We performed at our lecturer’s wedding … and that was the summit of my musical career.

Since then I have attempted to teach myself on the electronic keyboard and piano, at least progressing to learning the bottom line, base cleff, but never getting up to speed or coping with any music that has more than an f sharp or b flat to deal with.

The fun of being a writer is that if you can’t be a brilliant musician yourself, you can create one. Emma Dexter is a famous young violinist, pianist and composer from a very ordinary unmusical family. In Three Ages of Man, second of the Brief Encounters Trilogy, a stranger has made an impossible journey to find out what really happened to the woman whose music he loves so passionately.

2 thoughts on “Chords and Discord”