Dave got the idea from the television news. If tents and living pods could be dispatched to disaster areas why couldn’t homeless people in his town be helped. Dave wasn’t actually interested in humanitarian projects abroad or at home until the tent arrived in his shop doorway. Owning a shop was part of his plan to help rejuvenate the high street in Lower Sandbourne. The once thriving parade of shops and smart flats had gone downhill over the years, mainly due to the property activities of Dave and his brother, now he hoped to reinvent himself with ethically sourced gifts and fine food. There was nothing ethical about the origins of most of his goods, but smart labels impressed the chattering classes who could no longer afford to live in Upper Sandbourne. The Sandbourne Traders Association was pleased with the rebirth of a shop that had been an empty bakers and a blot on the high street for several years. 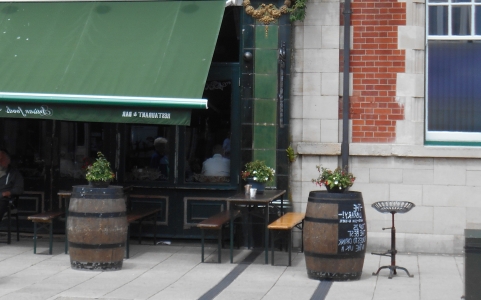 And then the tent had appeared. The doorway that presented excellent window display space was also a perfect size for a one man tent.

Dave had dispatched the first resident and his bedding to another town, but with the new CCTV and his new image this was no longer an option. The bleeding heart owner of the pet shop next door was certainly no help. She gave free dog food for the tented one’s sad eyed mongrel. Dave couldn’t complain as it was the dog that kept customers coming. Instead of being put off by having to step round a tent and over a pair of feet sticking out, the locals eased their conscience at not offering him their spare rooms by lavishing their attention on the dog and buying him unwanted cups of coffee.

The pod idea was enthusiastically supported by the locals. Dave’s gang of unqualified builders were used to makeover services to cover up structural defects in Dave’s property empire, so giving shipping containers a makeover was no problem. The council were happy to be seen doing something. By allowing the cabins to be sited on the car park they had just closed down for development, the residents could not complain about the loss of their convenience to such a good cause. The local family run garden centre was persuaded to provide plants and planters and the whole site looked quite pretty as spring blossomed. Sandbourne Hardware donated tins of Hammerite and most of the residents took a pride in painting  their cabins to look individual.

Carried away by the great publicity stunt the garden centre built raised beds for the local school to grow vegetables and as the settlement grew, most of the occupiers appeared to be happy, including those who had been made homeless by Dave in the first place. He did wonder how the metal containers would fare in a heatwave, or next winter, but by then the council would have evicted everyone to build the lucrative block of unaffordable apartments; a scheme certain to be tendered out to one of his subsidiary companies. Dave knew he would get the contract, he knew too much about certain councillors for them to turn him down.

In the meantime the shop doorway was tidy and the shop thriving. But trouble was afoot. Dave, the council and the growing jolly band of volunteers had assumed all the homeless would be grateful and no plans had been put in place to address the ‘complex issues’ of some residents.

Jack from the Sandbourne Gazette, who had been watching Dave for years, ever since he re-emerged from his short spell in gaol, had been biding his time. He had even less respect for the council and planned to snare them both. Syringes and other drug paraphernalia were found tossed amongst the round lettuces and spring onions and children started telling their parents about the scary man and the nasty woman at their garden. A row erupted over who was actually overseeing the project. Jack ensured that newcomers to the area would discover Dave’s past and his future plans.

But Jack reckoned without the initiative of the majority of residents who did not want to lose their new homes. They enlisted the help of the national media and Jack’s moment of journalistic fame was lost. The council hastily sent in their new street team, its numbers boosted with a few of Dave’s friends. Under cover of darkness and with a little subtle bribery, they removed the undesirables to a new assisted living project under a council far away. They were replaced by more acceptable homeless. Gardening resumed and volunteers set up ‘everybody together’ coffee mornings and suppers.

The project received national acclaim and most forgot once again about Dave’s past. Though his shop was doing well it hardly afforded the income he was used to, he would have to bide his time before getting another building project underway.

Everyone welcome here. Tidalscribe will be remaining in the European Union.