A Wife For Life

The mist still hung over the bracken, the Thames meandered peacefully by. A pair of antlers rose above the bracken, tilting back as a black nose sniffed the air. The morning stillness was broken by the thunder of hooves and the cries of young men. Harry led the way on his strong grey stallion, his powerful thighs gripping the saddle. The horse was as strong willed as his master and eager to gallop, his master was the only rider who could keep him in check. The young man knew his hunting grounds well, but the long grass and ferns could easily conceal a fatal rabbit hole.

The alert hart was swift to round up his hinds and flee into the copse, but it was another man on horseback that saved his herd. The messenger galloped frantically after the hunting party sounding his horn. Harry turned his steed sharply, knowing what the news must be.

‘Word from My Lady, Sire’ said the messenger breathlessly, as his panting horse drew level with the stallion.

‘Has her time come?’

The message was a few days earlier than expected, but not a surprise. Harry motioned the other men to continue the hunt.

‘Bring back the finest haunch of venison, God willing we will have a feast tonight.’

Harry galloped alone back to the palace, the messenger on his chestnut mare had no chance of keeping up, but his mission was accomplished.

Several grooms stood ready as their master leapt from his sweating horse. Harry was soon striding down the long corridors. Lady Maria Santos curtseyed at the door of his wife’s chamber.

‘She is in good spirits as usual, her waters broke but an hour ago, the maids are fetching more hot water.’

Ministers and courtiers were gathering in the corridor.

‘Go, go, I want no one here except the Queen’s physician and the lady of the birthing stool.’

Catherine looked up as her tall handsome husband entered the bedchamber. His red hair was tousled, he smelt of leather and bracken.

She laughed. ‘Your ruddy cheeks tell me you were out hunting.’

‘Not ten minutes ride from home and five minutes gallop back’ he laughed, as he knelt by the imported porcelain hip bath and stroked her swollen belly. She tensed as another wave of pain swept over her; but Maria the physician directed her skilled assistant to bring the bowl of steaming infusion from the fireplace. Catherine breathed in deeply and allowed the steam and hot water to soothe her.

An hour later Maria declared it was time and Harry helped his wife step out of the bath, supporting her as she squatted and clung to the stout oak bed post.

‘Good, good, I can see the head’ said Maria.

Gravity, skill and the efforts of the mother did their work and the lady of the birthing stool removed the blade from the fire and swiftly cut the chord as Maria held the crying baby.

But Maria frowned, handed the baby to her assistant, then palpated Catherine’s belly. For the first time the king felt fear as his wife’s face contorted in pain.

‘It is as I suspected, another baby, pray it is in a good position, I fear the cord is wrapped around its neck.’

It was yet another hour before Catherine lay back on the bolster, Harry perched on the high bed beside her.

She smiled. ‘Well done my King, did not Maria tell us it is the man’s seed that decrees boy or girl?’

‘…and was it not you My Lady, with your insistence on a Spanish court, who brought your wonderful lady physician with you? And now I shall fetch Edward and Alfred to meet their new brothers.’

Two little boys with red hair and rosy cheeks burst into the chamber.

‘Permission to retire, Your Majesty’ said Maria. ‘I shall return in one hour. Now I leave you to enjoy your family.’

‘I once nearly had you charged with treason, wanting me to dismiss the royal physicians, barring my ministers from the birth of Edward. But you were right, a King should be witness to the arrival of his heirs.’

The little princes ran around the chamber, swinging on the curtains of their parents’ four poster bed, stopping to peer at the strange creatures attached to their mother’s breasts.

‘Shall you not wish for a wet nurse this time, now you have two hungry babes my love?’

‘No, no, royal Spanish milk is what they need to grow strong like Edward and Alfred, but what shall we call them? I wanted Phillip if it was a boy…

‘A king’s prerogative to choose, and I have chosen. Andrew and Martin.’

‘Martin?’ Catherine formed the unfamiliar name on her lips. ‘What name is that?’

‘Martin Luther, a great man, I have been reading his writings, he wants to reform the church and he is right, I shall reform our church of England.’

‘Husband you are very clever, you know several languages and write me songs, but you are not the Pope, why does the Holy Roman church need reforming?’

‘We must have The Bible written in English so the people can read it.’

‘But most of your people can’t read.’

‘So they must learn and they will learn the Gospel when they hear it read out in English in churches up and down our blessed country. In our great monasteries the monks must set to work translating. King Henry’s Bible, a work my sons will be proud of. 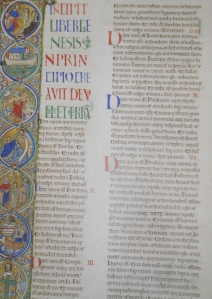