If you recall the Sunday School chorus you will know the wise man built his house upon the rock and the foolish man built his house upon the sand. The rain came down and the floods came up. Even if you don’t know the chorus or Christ’s parable, I expect you can guess where this is leading. It is meant to be about building your life on Christ’s teaching, but it is also good engineering advice; advice that builders and councils everywhere, especially in coastal areas, often pay no heed to.

Someone I knew told me her father-in-law once had a chance to buy a cheap piece of land on the narrow strip of sand between Poole Harbour and the sea.

No thanks, it will be washed away in twenty years.

Sandbanks is now claimed to be the world’s most expensive coastal real estate in the world and the man’s descendants could hardly forget what they missed out on. But one day I’m sure the sand will wash away and there will be a different way out of the world’s second largest natural harbour.

Move a little further east and cliffs start to rise towards Bournemouth where houses have slid down the cliff over the years. If left to their own devices cliffs naturally crumble into the sandy beach below. But when man made promenades and buildings are put up, the beach is washed away (coastal drift ) and if resorts wish to keep their beaches they must be replenished with sand dredged up from beneath the sea. Houses on the cliff top move nearer and nearer to the edge and remnants of gardens can be seen flourishing vertically on the cliffside. Chunks of cliff often fall on beach huts and three years ago a landslide wrecked one of Bournemouth’s three cliff lifts. 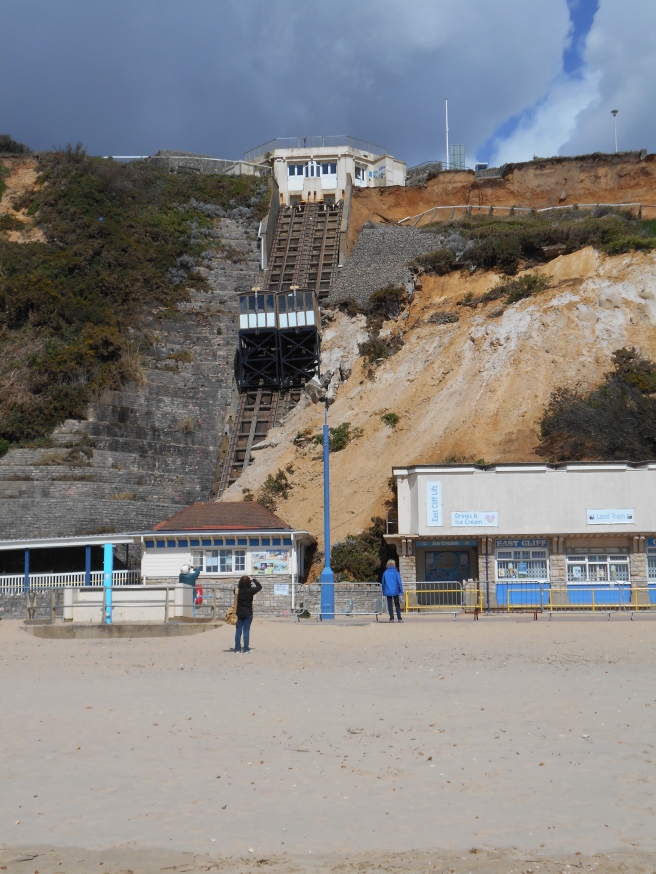 But the council doesn’t wait for nature to knock buildings down. Last week was the ninetieth anniversary of Bournemouth Pavilion, which has survived both because of and despite councils over the years. It apparently took eighty years of discussion before it became a reality in 1929. In its life time it has seen two winter gardens demolished, but also saw Bournemouth Symphony Orchestra leave and move to Poole’s new arts centre. Looking out to sea from the ballroom the Pavilion was witness to a monstrosity being built at Pier Approach. This was The Waterside, featuring dark glass and a wavy roof designed to represent the sea. It was more commonly known as the Imax building and caused an outcry when it was opened in 1998, owing both to its looks and the fact that it blocked the view across Poole Bay to the Purbeck Hills. The Imax cinema only functioned for a short period and spent most of the years closed. In 2005 the Channel 4 programme Demolition asked people which building they would like knocked down and the Imax was judged first in line in England. The council then had to spend millions buying the building, demolishing it and creating a public ‘space’. Perhaps if they hadn’t demolished the swimming baths that stood there for fifty years…

When we moved into our current house nearly fifteen years ago, the neighbour one side told us that the neighbours the other side were not there; they had to move out because of subsidence! This was a bit worrying and we should have known not to buy a house built on sand. We are not near the cliff edge, because those properties are too expensive, but we are on what was once sandy heathland.

Everyone is welcome here. Tidalscribe will be remaining in the European Union.

6 thoughts on “The Wise Man and the Foolish Man”