Not as sweet as sugar, smoother than chocolate, more luscious than a peach; neither food nor drink. That is how I would describe it. There was no description on the menu; it didn’t appear on the menu at Stopawhile. Ravi told me it was the nectar of the gods when I first tried it.

‘What a perfect description’ I replied, licking my lips in satisfaction.

‘No, it IS the Nectar of the Gods’ he said simply.

You couldn’t order, only wait until it was offered.  Ravi was the only member of staff to serve the nectar; come to think of it, there were no other staff.

It was a new café, where the old hairdressers used to be; the shabby blue and white had become warm brown and orange. Inside you could slip into a cosy corner, relax on a leather settee and linger as long as you liked. There were newspapers and exotic magazines, wooden chess sets and marble solitaires. The nectar deserved to be sipped slowly.

This was an ideal place to flop down with my shopping and sneak out my notebook; recharge my batteries before going home to tackle dinner. The nectar, in its delicate pottery bowl, seemed to stimulate creativity. My writing group were impressed with my short story and urged me to send it off to the competition, I won. I began a novel.

Of course I recommended it to other people, suggested friends come with me next time they came round. Somehow no one else happened to go that way. 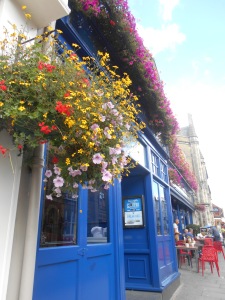 On Monday afternoon I staggered off the bus with my shopping, cold, tired, with blood sugar level zero; I was looking forward to my visit to Stopawhile. But it had gone; not closed down, disappeared. I thought I must have walked past it and retraced my steps. Bank, charity shop, greengrocers; it should have been next, followed by the bakers. I stepped into the greengrocers feeling bewildered; perhaps they had bought the little café and expanded into it during the weekend.

‘What’s happened to Stopawhile?’ I asked.

I was met by blank stares.

‘You know, the café next door, it was there on Friday.’

‘You mean the one up the road?’

Flustered, I bought a bunch of bananas and stepped carefully outside. On the pavement were the usual stands full of fruit and flowers and next door was the bakers. I stepped inside the tiny shop and tried another tack.

‘Have you moved shop?’

‘Not in the last hundred years.’

‘But what’s happened to Ravi and the café next door?’

More confused expressions. ‘If you’re looking for a café, try the Cosy Teapot up the end of the high street.’