When we are watching Mastermind or University Challenge, one question I can always answer is What is the name, meaning treeless, of the large / vast plain in Au… NULLABOR I yell.
As part of my pandemic escapist reading I have been dipping into Bill Bryson’s book ‘Down Under’ published in 2000. Coincidentally up popped Australian blogger Rowena’s ‘Beyond The Flow’ A-Z challenge ‘N’…

I loved reading about the Nullarbor Plain as I have crossed it! Once. Time and distance have left a romantic feel to the experience which probably did not exist at the time.
When I was browsing on the internet for Nullabor nuggets I came across this
Latin nullus ‘no, none’ + arbor ‘tree’
I never studied Latin, but I like picking up Latin origins and reading that line the Null arbor origins are obvious, but I had always assumed it was an Aboriginal word. It sounds like a name they would have been using for thousands of years before Latin was even invented.
‘The Nullarbor Plain is the world’s largest single exposure of limestone bedrock, and occupies an area of about 200,000 square kilometres, stretching about 1,100 kilometres from east to west across the border between South Australia and Western Australia.’
Our trip in the early seventies was from Perth to South Australia and my Aussie friend’s uncle’s orchard; then Melbourne, Sydney and eventually Tasmania. As I ended up back in England the following year ( that’s another story ) it remains my most adventurous trip; at the time there was a three hundred mile section of the highway that was still only gravel. 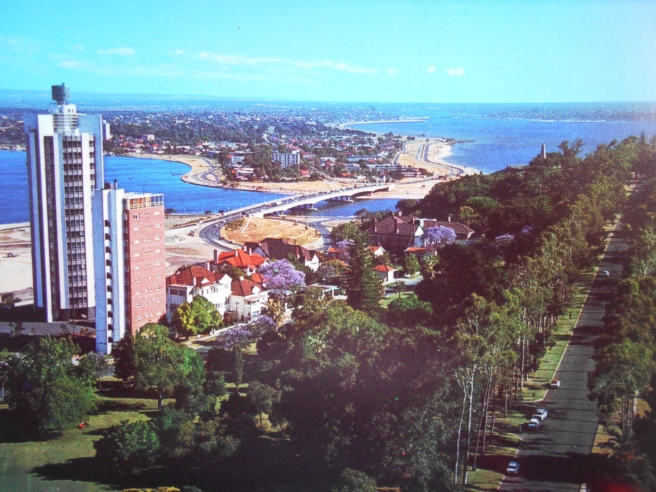 Back in 1964 when we were new migrants we met another new family (of the whingeing Pom variety) who said if they didn’t like Perth they would drive over to Sydney. When an Aussie mentioned it was rather a long way they said they would take some sandwiches! I often wonder if they made it.
It is a long way. 2,444 miles – 46 hours 34 minutes in moderate traffic if you are planning to drive today.

One of my impressions was that we drove through a vast wheat belt, then the vegetation got smaller and sparser until it barely existed. On the other side the scrub gradually grew again and we drove through an identical wheatbelt. We slept on the beach at Eucla, we certainly never stayed at any accommodation. My friend was of tough farming stock, but the family friend we hitched a lift and shared driving with was another Pommie and I’m sure he and I had no idea what we were letting ourselves in for, though we knew the basics; take plenty of water and NEVER wander away from your vehicle. I had never been away from home for more than a week, my parents also had no idea of the journey. Were they worried, I’m not sure. In those pre internet days they would have had no idea if we had arrived safely until they got a picture post card. Absolutely nothing went wrong, though it was a boring drive and so easy to drift off to sleep at the wheel on that endless straight road. But a trip well worth taking to understand the vastness and aridity of a continent where most people cluster round the coast. Here I have to confess that it was so boring that nearing the end of our trip, after meeting up with friends who had flown over, loving Tasmania because it was so green and lush, just like England, I went into a bank and was pleasantly surprised to see a pay cheque had gone in to my meagre account. I booked a flight from Sydney back to Perth. A three hour flight that landed in Perth at the same time we had left Sydney. Sitting next to me was an unescorted child who kept saying ‘Are we nearly there yet’ so the flight felt longer than three hours, but not as long as the drive across the Nullabor.

My children claim I was always talking about ‘when I crossed the Nullarbor Plain’ and it wasn’t till we were all chatting with an Aussie visitor about the trip that my then teenagers revealed they had always assumed I had driven across the Nullabor Plain by myself! No way…
Bill Bryson’s book describes the train journey across the Nullabor, a trip I would love to take, in a comfy sleeper, not the economy sitting all the way. He got to ride for a while in the driver’s cab and describes seeing a railway line that stretched dead straight for hundreds of miles.
Perhaps most intriguing about this journey is to realise how isolated Western Australia is. Holidays in Bali are nearer and cheaper for Perth people than going to the Eastern States. It could be another country especially when there is a pandemic on!

Have you crossed the Nullabor Plain?

My novel Quarter Acre Block was inspired by our family’s emigration to Western Australia.

22 thoughts on “And Now for Something Completely Different”